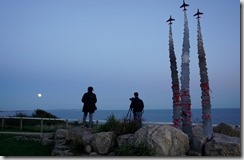 The wind was blowing chill off the sea when I arrived along the East Cliffs above Bournemouth.  The Needles glowed off the tip of the Isle of Wight as the sun set.  A steady procession of swells rolled in from the southwest, attracting seabirds and surfers.  Photographers started gathering along the paths, setting up tripods and adjusting lenses to get the best views.

The big event was the Supermoon Lunar Eclipse.  The moon was due to pass through the earth’s shadow just past 2 am, local time.  It coincided with the closest approach of the moon in its elliptical path around the earth, making the disc appear 14% larger in diameter, up to 30% brighter, than normal.

We had clear skies and a beautiful sunset in Dorset: great practice for the show to come. 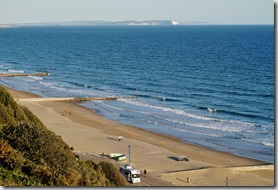 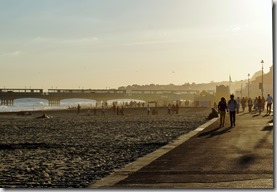 On cue, the moon rose over the Isle of Wight. 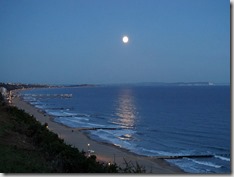 It really was spectacular: absolutely brilliant against the darkening skies and the reflecting seas.  The professional photographers were getting wonderfully detailed shots of the lunar surface.

Nearby, an elderly white-haired man sat on the park bench watching all of the excitement.  Early in the evening, he talked to me about traveling down from London, staying with his family, what the eclipse was all about.  He kept to himself when people started to arrive, but came over as I got ready to leave.

‘I’ve written you a poem,’  he said, offering to read it:

It was the night of a full moon,

It was beside the sea.

My heart was full of happiness,

My spirit full of glee.

It was in beautiful Bournemouth,

God bless you and all you meet

And may you always have a smile on your face.

It was unexpected and nice:  I told him how much I appreciated it, and he jumped a little and clapped his hands, laughing.  We shared a brief hug and smile, and then were off our separate ways, under the rising moon.

It’s been the usual whirl of activity that follows a week of travel.  Phone calls and emails, coffee with associates and prep for chairing next week’s MedTech Investing Conference in London filed each day.

a classy new motorcycle and deluxe pizza box to make the rounds.  They get out into the countryside with it when not working.

Away from the computer, I’ve focused on the basics: getting regular sleep, preparing fresh meals, and exercise each day.  I started at 200 cals / 20 mins, but was back up to full 45 minute HIIT routines / 600 cals by week’s end.  The summer’s excess weight began to drop off in parallel: October’s goal is to be back to where I was in spring.

It’s also been good to get the feet moving again.  My PT has tut-tutted over the stiffness in my small bones, reminding me that stretching and walking remain important.  So, I’m taking more time along the shore again, usually late in the day, looking for the first signs of autumn, looking for the best light and composition. 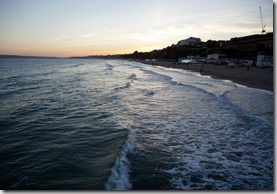 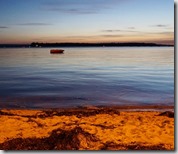 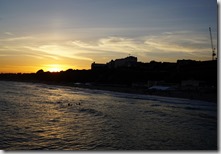 It’s impossible to know much about a person just by looking at them.

The gentleman to the right is a French artist, Gérard Garouste.

He has been painting figurative, mythological, and allegorical works for 40 years, exhibiting mainly in France.  Twenty years ago, he helped to found The Source, helping culturally underprivileged young people to achieve personal development through artistic expression.

The Maeght Foundation is hosting a retrospective of his work through November, and I had an opportunity to visit the gallery a couple of weeks ago.  It is a game of funhouse mirrors: The works follow the thread of restless thought that the creator offers us, suggests the guidebook.

His reality is somewhat grimmer. The artist describes the space as one of restlessness, madness.  His works tell stories about the Torments of Men through them grotesque deformation of his subjects. 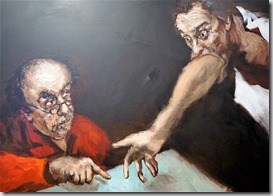 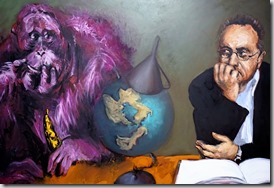 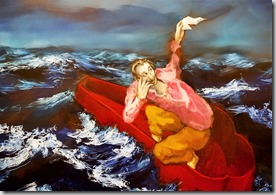 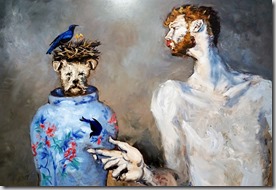 It’s a provocative and unsettling series, large bold canvases filling room after room.  They are well executed and boldly emotional.

Still, I might have enjoyed them more if they weren’t so out of character with the avuncular artist described in the lobby.

My photographs wee taken with permission of the Maeght Foundation.  The works are copyrighted, and are used here only for review. All rights are reserved by the artist.

Along beyond Weymouth, farther past Bridport, lies the coastal community of Lyme Regis, West Dorset.  I remembered it mainly for Richard Austin’s amazing storm photos taken in January 2014, when the entire town seemed endangered.  The local events calendar suggested otherwise, offering the Lyme Regis ArtsFest, a combination of Open Studios and sculpture parks spread throughout the community.

The theme is In Transition, which the event’s Artist’s Guide suggests differs from ‘change’: 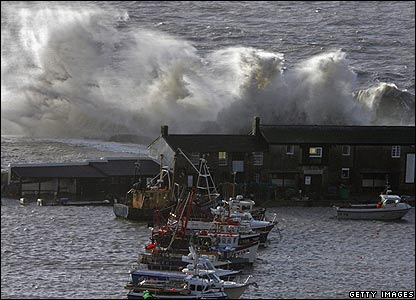 it is intended to capture the moment when ‘it’ is happening.

It begs an intriguing question:  Can people change?  For a couple of years, I’ve been adding topical articles into a Transitions collection in Pocket.  I think that it is hard for anyone to break habits, perhaps impossible to change their temperament.  But I’ve also seen that trauma and failure, life’s figurative storms, do change people.  They may swing better or worse afterwards, but they are never the same.

‘good to see what the artist’s take might be.  We packed the car and headed west along the coast highway.

Lyme Regis reminds me of Llandudno and the north coast of Wales.  The steep pebble beach is bordered by a curving row of pastel guest houses. Ice cream and shellfish restaurants line the promenade, crowded with young families and elderly couples. We browsed the antique shops, walked out along the seawall.  It’s all relaxed and leisurely, a nice feel that encourages a sit and a talk on a sunny afternoon. 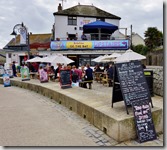 There’s little evidence of storm damage today.  Sections of the harbour look newly concreted, but shopkeepers say that the walls were put into place to prevent the land from subsiding, not to hold the seas back.  Everywhere, there are long views of the cliffs along Jurassic shoreline, and the nets and trawlers of the local fishermen. 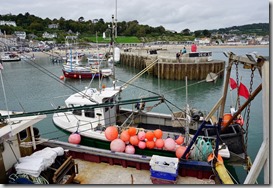 The arts exhibits were clustered in a few gallery locations and included some nicely original works.  I liked Isla Chaney’s organic works, the intersecting curves and the way the captured the light; John Calder’s woodwork sculptures were nice along the cliffs, while Kathie Scott’s misty paintings reminded me of some favorite Whistler works. 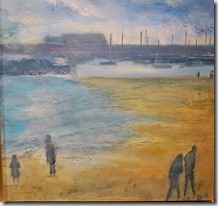 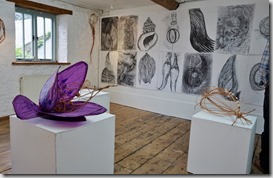 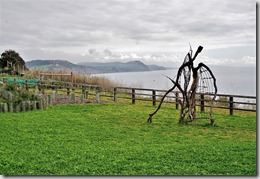 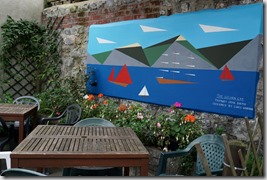 The giant bird in the Malhouse and seaglass bowls in the galleries were also lovely.  The cascading textile meant to simulate a landslide, the collages, and the plaster impressions were generally less successful in conveying an idea.

Our favorite local ‘art’ was not really art at all.  It was, instead, artifact: a plaque along the seawall assuring that this structure would never, ever, be named after anyone.

Most dealt with natural transitions rather than human ones, although the accompanying sketch books suggested that everyone thought deeply about their contributions. 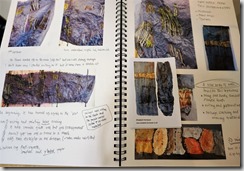 And, as always, its fascinating to see original works develop as the artists work in front of you.  I need to get back to my charcoals and watercolours, ‘see what I might do with the themes myself now that I have a bit more discretionary time.

I love to travel.

It’s been years since I last saw friends and colleagues at the annual cardiology gatherings, decades since I last visited the Far East.

I enjoyed the conversations with students and catching up with colleagues, mentoring and reminiscing.  There was a lot of art and a lot of science to explore, and discuss.

The business meetings, veering between formal and familiar, brought new ideas about how to complete products and how to achieve profits.

And, in the off hours, there was the challenge of understanding and traversing a new culture on my own, the experience both stimulating and humbling.  Like my early days living in Europe, everything was again new.  The simplest tasks of catching a train or ordering a meal took unaccustomed time and thought.

And, finally, there is happiness in getting it right.

I love to return.

There’s comfort in spending a long twilight along the Bournemouth beach.  I can make easy talk with the server, eavesdrop on the next couple in line waiting to order, pick up the nuances of face-to-face conversation.

There is normalcy in catching up with gossip and politics over strong warm beers.

I enjoy the ease of ordering familiar foods after driving the well-worn A338.   People wake when I do, work, then settle into  evenings and weekends when I do; I again cook meals for sharing together.  My clothes are spread out and hung, I have enough plugs, and I don’t have to walk miles on an injured toe.

And, finally, there is happiness in being welcomed.

Yes, it has been a while…

September shaped up as the busiest travel month of the year for me.  After returning from Maastricht, I made a wide circle through Birmingham (UK), Vence (France), and Tokyo (Japan).  The visits were all good and I’m turning optimistic about our prospects again.

For most of the year, my business wrestled with financial and legal issues.  In August, we laid them to rest, freeing money that could be used for people, services, and tooling.  We paid back salaries; we reorganized the executive team.

Gratifyingly, w.We began ticking off milestones  again: meetings with commercial partners, appointment of our regulator (the Notified Body), qualification of suppliers and manufacturers.

With work and a little luck, we’ll be in-market next summer.

I landed at Heathrow after a 16 hour flight from Narita through Amsterdam.  The sun chased us, I watched American Sniper and The Graduate and held off sleeping in anticipation of landing at 7 pm.

Someone nicked my tablet in the executive lounge in Japan, both annoying and uncharacteristic.  I used Google’s Device Manager to post a contact number and reward on screen if anyone should turn it on (and to erase it if anyone logged in).

Fortunately, it was replacement-insured: I always take the protection on phones and computers. 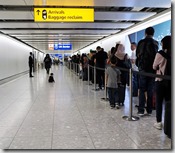 Heathrow was, unfortunately, a mess. The lines for Border Control wound from concourse to concourse.  It took over two hours to reach the front of the queue.  The fellow just ahead of me got pulled out of line for taking pictures of the line, and was made to delete his photographs.  I laid low.

How long have  you been out of the country, asked the agent.  “Ten days”  Two weeks if you count time in line?

Quite.  We speculated about whether my upcoming dual citizenship would help?  He thought it would slow me at the US border, although the British wouldn’t care.

It will take a few days for me to catch up: on sleep, emails, jet lag, photos, and follow-ups.  The house has turned over in my absence: we now have myself, a seldom-seen German couple, a pair of young Portuguese nurses, two mismatched Hungarians, and a sweet Indian IT guy.  If I stay long enough, the whole world will rotate past me.

I’ll back-fill the blog as I get pictures processed, working ahead and back from this point.  A week, ten days, and it will be like I was never gone.

Still, I’ve missed the writing and conversations.  It’s good to be back.