‘plans for the weekend?  The professor raised an eyebrow, gathering papers.  “Going up to see the Peak District.  ‘Staying in Buxton, exploring the northern loop of roads.”  Ah, the peakiest bits…  “Really?”  Well, no, but peakier.

The name ‘Peak’ derives from the original Anglo-Saxon tribes settling the region, the Pecsaetans, rather than its rolling limestone hills.

We stayed at the Old Inn in Buxton, reputed to be the oldest hotel in Britain.  It’s a classic pile of stone, an archaic lift, elegant carpets and deeply confortable chairs.  Breakfast features some of the better sausages I’ve had in Britain and an eclectic collection of local curds and preserves.  ‘good fun throughout.

Nearby is Bakewell, a busy village filled with art galleries, craft shops, and tea rooms.  All claim to be home of the original Bakewell Tart, possibly a pastry or maybe a woman, depending on the establishment.  The old church above town has the best views over the valley.

The Park has a visitor’s office, and I stopped in to ask directions to Stanage Edge, one of the landmark hikes.  It’s like the moon up there, the roads are bad and the terrain is rough, the Ranger advised.  “Too rough for a Fiesta?” I joked, but elicited only sympathy.

No matter, we continued up to Eyam, the original Plague Village.  There is a National Trust shopping park and a museum: an hour of exhibits devoted to the swift and horrible deaths of most of the town’s inhabitants in 1665.  The stylized rat over the entry, the journals, the artifacts and census graphs assure that no angle is left unexplored.

An unmarked side road north of Bamford rises steeply through the autumn foliage towards the scarp at Stanage Edge.

‘Actually well paved and easily navigable, the road follows the base of the cliffs, giving good views of the Parklands to the south.

Although threatening rain, we took a good long hike up onto the promontories (passed by climbers in helmets, roped together).  It was gusting wind and spitting rain, perfect weather, sloshing around the puddles and slipping on the rocks (I’ll earn my passport).

‘back out through Hathersage, refuge in a Castleton pub and a reward of fudge and ales amidst Halloween artifacts.  It’s actually a delightful area despite the wicked weather, lovely colours and amazing scenery and well worth a leisurely visit (even without the peakiness)

Zuurvlees, literally ‘sour meat’, is a thick and tangy beef stew that the Dutch serve over friets (french fries) or in a crock alongside roast potatoes and beets.  In cold weather, it’s local comfort food in Limburg (originally made with horse meat rather than beef).

With the weather turning wintry in Dorset, I thought it was a good time to make a batch.  There are good recipes on the Internet, I prefer this one in English, and this one in Dutch.  However, I discovered a few tricks that need to be added to give it the taste and texture of the original, pictured above.

Both recipes require a couple of

ingredients that are unique to the Netherlands, so plan ahead.

Appelstroop is an apple syrup, more like a jelly.

Both are available in any Dutch food store, so there is no need to make them special.  If outside the Netherlands, Andre Rieu offers a recipe that substitutes these ingredients.

The first task is to pickle the beef.  For veg, this is traditionally done with a 50/50 water-vinegar mixture, sealed and marinated for days.  Meats usually use a salt brine instead of vinegar brine.

Zuurvlees goes for sour earthy flavours, so marinate in lemon juice and vinegar, sharp onions and spices.  I use a 50/50 mix with cider- or white-wine vinegar,  then over and refrigerate for a full day.

Browning is recommended with

medium-high heat in olive oil / butter, but I’ve found that the meat releases a lot of brine as it starts cooking, preventing the browning.  I start at medium, decanting the liquid off into the brine mixture (it all goes back into the pot later, so the pan scrapings aren’t lost) .  Then once it’s drier, increase the heat and dry-sear the meat on all sides.

Finally, simmering needs to continue until the meat is starting to fall apart, but not past that point.

It takes about an hour fifteen, not the full two hours recommended (my first batch turned to mush with the extended time).  Replace the evaporated liquid with 50/50 water-vinegar mix to keep the meat covered for the first hour.  Then let the sauce reduce and thicken to a thin glaze before adding the crumbled spice bread and apple syrup for the last five minutes.

It all turns nicely rich and fragrant with that final add, and the meat remains chunky and tender.  I I pound of stew beef yields about 1 full bowl of stew, enough for two medium servings if put into a bowls, two generous servings if spread over roast potatoes.

The flavour was pretty authentic with every batch.  However, it took several tries to get the texture right.  That balance lies in cooking the meat less while reducing the sauce more.

Sometimes, the best discoveries come from wandering while lost.

May, early summer in the New Forest.  I had a spare hour, so took the slow road through Brockenhurst following interesting signage.  The Victorian logos indicating  The Pig were naturally appealing, leading to a country house and gardens, restaurant and lodge, that I noted for a future visit.

Fast forward five months.  I’ve decided that the restaurant is perfect for my w.wezen, but reservations are impossible (making it infinitely more desirable).  I finally nail a weekend table pour deux and make a day with it.

The restaurant prides itself  on sourcing ingredients from the garden, so the first order is a stroll through the beds and greenhouses, discovering a massage hut in the middle of the hotel’s pond.

Then it’s into the conservatory for lunch.  While the venison starter was questionable, the mains (pheasant, for me) were well prepared and tastefully presented.  The FT recently wrote that the best way to parse a wine list is to swallow pride and ask the sommelier.  I gave it a go, and he did, indeed, offer an outstanding glass alongside the meal.

On to the library for pudding (dessert), a lovely berry tart topped with a unappealingly coloured sauce.  No matter, we used the time to speculate over the connections and classes of the couples newly arriving from the car park.

A last stroll around the grounds to walk off the lunch and a slow meander back north through the woodlands. It’s all a nice, British sort of vibe: the day in the countryside, good food in the bric–à–brac surroundings, the well-labeled gardens and greenhouses.

And, relaxing into it, it makes for a nice autumn break in the center of the Park.

Disclaimer: As always, I was neither asked nor incented to visit, and the opinions and photos are my own. 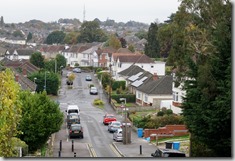 How do the Middle Class live?  Could you distinguish a middle-class family home from those belonging to working- or rich- classes?  How would you judge?  And would your criteria be transferrable to other countries?

I think that I could pick them out, but not based only on the type of house.  The home’s upkeep and trim, the type of car in the driveway, the owner’s possessions and interests on display in the back yard, would tell me more than the scale of house or the way it fills the lot. 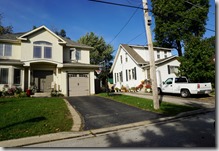 I thought about this a lot as I drove through the Chicago suburbs, the enormous contrasts between US and European homes.  The suburb, build after the second world war, benefitted from abundant land and cheap construction materials.  The streets are wide, the homes set well-back, every house detached from its neighbor by a generous border.  The back yards are enormous and open, bordered by flowers and dotted with islands of garden.

I took a similar drive around Poole when I got home, taking pictures that I thought captured the economic variations in households.

First, some cultural orientation, Britain went through a similar burst of home-building sixty years ago.  They built more brick dwellings, and more semi-detached homes.  People generally build smaller in Europe than in the US, and an similar size and style of house will cost at least double the price of it’s US equivalent.

And the back yards tend to have sheds in place of garages.

Okay, with that said, can you assign class to neighborhood?

British locals tell me that these are all examples of middle-class homes.  ‘Perhaps by Poole / Parkstone standards, but these would be very distinguishable neighborhoods in the US.

As an aside, these homes are all distinctly ‘British’ styles of architecture to me, very distinct from US-style dwellings.

Still, the market is not immune from the occasional lot-filling mega-home rising in Sandpoint. 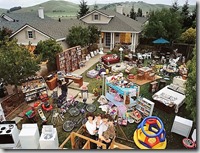 Finally, a worthwhile survey is Peter Menzel’s Material World: A Global Family Portrait.  It documents 30 statistically average families, with all of their worldly possessions displayed outside their homes.

The problem is, I always travel to attend meetings at their venues.  I never ask them to come to mine…

300 road miles, on the back of 10,000 by air, and I’m admitting to a friend that I’m feeling a bit grumbly at still living out of a suitcase.

My next week of

meetings seems scattered all over England.  Worse, fall has definitely arrived, making for a cold wet week of driving.  The skies are low and the rains are falling everywhere I go, already.

So, starting in London and tied to a late train by my railcard, I struck out walking to explore American expat Cy Twombly’s works at the Gagosian Galleries.  His paintings and photographs turned out to be a bit too abstract for my taste: they seemed careless and unfocussed, absent the minimalist romanticism that critics say that they found.

I much preferred taking street photographs as evening spread across the city.

Cambridge, today, was all breezy drizzle and glistening leaves.  My meetings and visits went well, but it was also nice to go out and enjoy the surrounding pastorals.  Vivid colour filled the garden centre’s and country roads around Fowlmere, lit the leaves in reflected sunrise at Wolfson, accenting the woodland’s contemplative quiet. 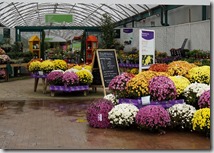