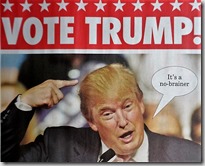 Increasingly, conversation turns to the Donald when people find out that I’m American.  Would the US  seriously consider electing Trump as President?  I pass it off with a smile and assurances that this will pass.  It’s as though Richard Branson were to rung for Prime Minister:  Surely that would attract similar raised eyebrows and transient enthusiasm among folks fed up with politics as usual?

But what’s propelling his popularity, they ask.  Surely people can’t be blind to what he is saying about walls, women, and Muslims.  They must be doubting his temperament and qualifications for representing America on a world stage?

In this vein, I like John Dickerson’s analysis for Slate: Trump is a phenomena with the potential to anneal the Republican Party as well as to destroy it.

Anyone aspiring to presidential leadership must be prepared to deal with other world leaders saying and doing emotional, irresponsible, thuggish things.  Trump is, in one sense, a demonstration of how potential leaders might deal with these people, with logic, with persuasion, with principal, and with strength.  So far, none of the other Republican (or Democratic) candidates have shown any ability to effectively counter Trump’s rhetoric.

When looking at the underlying economic woes of working class America, the middle-class backlash against urban elite culture, or the rise of nativist sentiment, the forces driving Trump are not suddenly about to vanish.

The worst impulses to respond with anger need to be confronted.   Thoughtful positions that lead to real solutions need to be proposed and argued.

On reflection, there seem to be five positions that I might take in a serious conversation about Trump’s candidacy:

I recommend Edward Luce’s commentaries, writing in the FT, for thoughtful analysis of the whole thing.  His column today captured the European worry perfectly:

Within the next three weeks, we shall find out if the rise of Donald Trump is silly season froth that comes before voting, or whether we are in the midst of a dramatic upheaval in US politics. My head is agnostic. But my gut tells me things are changing for the worse.

email
« A blustry day on Avon Beach
Back in the day…. »
Radar Weather