Its a working few days in Maastricht, time spent with design groups that are working for the business, and a lot of catch-up with lapsed pieces of everyday life that scatter in my absence.  The PT clucks about how stiff my ankle has become since we last met; my housekeeper stops by to discuss the mail, (my) legal and (her) insurance conundrums.  Our lives are never simple.

Still, my bike has not been stolen and it’s nice to wake to the chimes ringing across the rooftops (even at 2 am).  Work seems almost complete on sinking the A2 below ground, but the sporting goods store next to me looks to have gone out of business.  I see change in glimpses, registering differences. 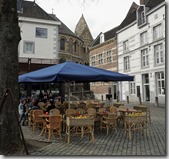 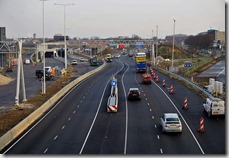 Visitors to the ‘skade have left plants and flowers which are, surprisingly thriving: I leave thank-you notes ahead of their next visit.   We discover that most of the cans and jars are years past their expiration date, and lug it all to the recycle bins up the river.  I catch up with folks in the restaurant downstairs and the cafe/pub next door, who all seem to be doing well.  The bier van de maand is Bush 12%: headaches ensue.  I’ve been gone too long.

We get out in the evenings for borrelje: bitterballen en drinken, talking as the sun sets, watching the fietsers drift by like luie vis. I’ve missed my things, the people, the pace, of Dutch life.

‘up early and off to Dover this morning for a circle through Belgium, the Netherlands, and north England.  The weather started out wintry on the drive east, rainy and windy, ill omen for the ferry crossing.  But it opened to sunshine on approach to the refurbished Port entry, maybe a smooth sail?

‘not to be, the wind and waves picked up as we left the harbour, and the boat pitched and rocked for the whole two hours to Dunkirk.  I took my favored spot at the fore-windows, a table near the cafe, and kept my eyes on the horizon.  unable to do any reading, the mind starts to wander.

What body of water are we crossing to France?  The English Channel?  Well, mostly.  The eastern limit of the channel lies along a straight line stretching from St. Margaret’s Bay, a couple of miles north of Dover Docks, to Wade Lighthouse, a couple of miles east of Calais.  Beyond lies the North Sea, with the ferry pretty closely tracing the boundary.

More interesting, this line approximates a shallow ridge that is the remains of the land bridge that once connected Britain to France.  At the end of the last ice age, the ridge  rose above sea level, damming waters flowing from the Thames and Rhine rivers into the North Sea, forming a large lake behind the retreating ice sheets.

A quarter million years ago, the lake topped, then breached, the chalk ridge.  A vast surge of water flowed south and west, scouring the seabed and creating the English Channel.  It may have lasted months, yet released a million cubic meters of water per second.

These findings are actually from very recent research (Nature, 2007), a result of improved technology able to map the ocean floor with sufficient resolution (10 cm) to reveal the streamlines and erosion features left by the surge. 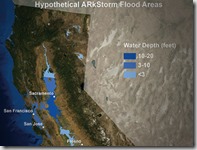 Are megafloods still a risk to coastal areas?   No, but yes.   Other recent research suggests that, although vast reservoirs from melting ice no longer exist, atmospheric rivers resulting from extreme weather conditions may have similar effects.

Geologic studies suggest that massive floods, caused by rainfall alone, have occurred in California every 100-200 years (the last one, ominously, was in 1861).  The USGS published a study in 2010 modeling the results of an ARkStorm of this scale, its a fascinating read.

‘Safe across the Channel and tucked into Dunkirk, we made a quick provisioning stop at the Auchen near the port, and motored on towards Maastricht.  It was well past dark on arrival, I retrieved the key from Bert and got things unloaded, the apartment opened, and unpacked to settle in.  It’s been too long, but (despite a weather eye on the Maas after all of the high-water stories) very nice to be back.

Easter Monday, once a chance to catch up during the bank holiday, now a day that I religiously take away from my desk.  The coming week will be a busy road trip, so it seemed appropriate to balance with a quiet walk along the Thames in the first days of spring. 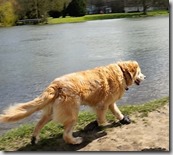 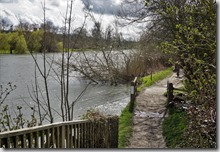 The light was great, the boats were out, and lots of stately mansions and old churches to study.  The trail was muddy from the weekends rains, slippery and clodding to shoes.  No matter, we skirted the puddles, clinging to tree trunks and swinging along the edges of the path.

40 minutes out, it became apparent that there was no ‘next village’ anywhere in sight before sunset, so we turned back for traditional pub grub and beer (gin and tonic for the heartier souls).

Our Saturday storm blew itself out ahead of Easter Sunday, black skies and spitting rain giving way to sunbreaks and rainbows.   Still, it’s unseasonably cold (even in England’s tropics), actually bracing to make the rounds from Sandbanks to Poole Harbour, stopping for a walk and a few pictures.  The Jazz Cafe served an excellent late morning breakfast that was a warm relief during the hail that started pounding the tables outside.

Afternoon finds me back at 5 Woodside, sorting through potential telephone plans that might make an impact on my costs without sacrificing quality.

With the demise of Operator One, my mobile phone bill has magnified beyond all reason.  Most of it is due to ‘quickie convenience calls’, made to or received from US and European clients.  The bill has risen to several hundred pounds per month: something Needed to be Done.

There are basically three ways to arrange cheap overseas calls.

The easiest is to effectively buy a local phone number in the US that connects directly to a dedicated UK number.  This was Operator One’s approach, but most other services are not two-way.

Internet calling may be an option if your data plan is cheap enough, but remember that Skype is surprisingly data-intensive:

The most common is to buy a phone card that promises special rates: prepay the card, dial the access number, and place the call: the card is debited the amount.  It seems like a lot of work to fumble for cards and dial a lot of codes.

An all-in-one solution are plans that use a special direct access connection to the local provider before dialing the international call.  The call is billed at cheaper rates through the local provider and the charges show up on the regular phone bill.  I worry about transparency, though, and who has responsibility.

The best solution, from my perspective, was a service that would  transparently intercept and reroute international calls through the low-cost provider.  I chose Rebtel, which installs a light app on my phone that reroutes calls and debits a credit account that I keep with them.

Note added:  Rebtel has worked well for me: Call quality has been very good, and only seems to drop connections when refilling the credit.  Most importantly, it has dropped my bill to under £50 per month for the same number of calls.

The usual disclaimer: I have not been asked to review plans, and have not been compensated for recommending one.  These are my own findings and thoughts, and I pay full-fare for the plans I use and the calls I make.

‘taking my coffee canister out of the cupboard, squinty 7am on a Saturday, I brushed away a tendril questing up from beneath the lower shelf.  The water boiled (100C), weight checked (12 st 2), coffee scooped into the carafe (4).  Tendril?

I reached behind the pans and extracted a

n enormous sprawling potato plant.  The wrapper said Nov 5, so they’ve been growing in the dark for five months, finally bursting the package and seeking the light.

I didn’t have the heart to throw away something with that spirit, so dug a hole for her in the back yard, watered and fed, and wished it well.

It was an apt symbol for the day.  Although rain was forecast for the afternoon,

I thought that I could take in the Dorset Food and Vension Festival if i got an early start.  It was a 15 minute drive over to Lytchett Minster and I found the Post Green mansion.  But that was really it: the family was in and out, the trailer residents in an adjacent field were waking.  The festival website had crashed, frustratingly. I fiddled, trying to figure where I went wrong

You won’t find it,a portly man offered, walking up beside the car.  They took it all away last night when the forecast called for gale winds.  He shook his head.  We expected 2000 people, 150 vendors sent home.  Maybe next year.

Okay: Plan B.  The Wareham Easter Beerex, in the Masonic Hall five miles away.  The entry staff refused to believe I was 60+; flattered, I took the regular entry and bought four half-pint tokens.  Inside was a community hall with a wall of pony kegs and a stapled guide to the beers.  It’s numbering bore no relation to the indexed pours. Attached was a ballot asking for my top fur picks of the show, suggesting that I’d need well in excess of my weekly limit just to fill it out.

“Something dark and strong?” I enquired hopefully, and got a half-pint of Black Bear Hotel Stout.  Ruby coloured, roast and malt flavour, mellow aftertaste.  Very nice. 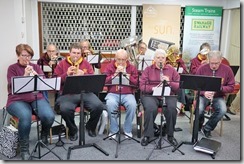 A local variation on a German beer band started playing a variety of oom-pah tunes.  I parked on a vinyl couch and started reading the guide.  A portrait of The Queen watched me critically from the far wall.

“Tart Pig Special?”  Pale and strong, bitter to the end.  A loser.

“Your favorite?”  Smoky Joe, 5%.  British and American hops, dark and roasty, coffee notes, oaky to the end.  A nice way to wind up the hour.

The wind was rising, I went back towards Sandbanks to walk the gusty beaches.  The lifeguards hustled to secure the flags; the restaurants were closing early.  Out toward the Rocks, both sail and ferry boats were hurrying towards the harbour as evening fell.  The rains began in earnest. 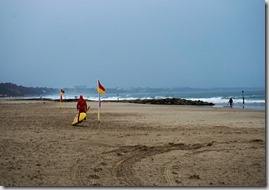 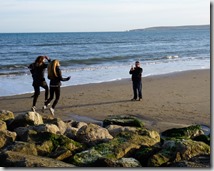 Europe is into the four-day Easter weekend, stretched a bit to make six for many folks.  For me, ‘just another day at the office, with a couple of major issues headed towards resolution (who knew that Salt Lake City might be my mecca for sterilization validation and biocompatibility testing?).

The weather warmed and turned sunny for a day, although winds and rain are forecast to drop in for the weekend.  The Guardian correctly recommended leek and potato soup under the circumstance, palliative for the lack of spring, but was hopelessly mired in the details.  For me, it should be both simple and inclusive.

An 8-ingredient recipe, trimmed to the essentials.  And, as a bit of a one-pot wonder, adding whatever is on-hand (onion alongside leeks, double-cream for milk, a touch of chestnut mushroom for flavor since I only have mild cheddar).

As was the sunset.  It was low tide along Sandbanks, washmarks and stranded boats adding foreground to the orange and blue skies over Brownsea Island.

And when the lights came on along Shore Road at twilight, again, it was very nice, indeed.