As summer breaks, the annual Quayside Music Festival (Bank Holiday version) and Fayre in the Square gather in Weymouth.  Two days  of music, food, drink, and boats in the center of town, accompanied by the first crush of heaving crowds along the beaches.

We arrived a bit late, so parking was pretty much impossible.  A stop for fish ‘n chips was mandated along the walk into town,  gathering strength for pressing through the crowds, before moving on to the beaches (and the Queen’s 90th birthday commemorative sand sculpture). 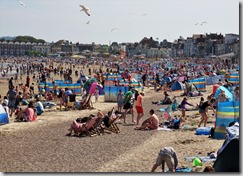 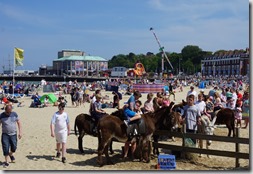 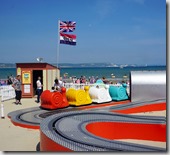 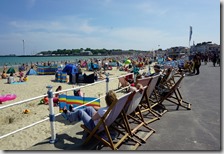 British beaches are all windbreaks (actually, privacy screens) and deck chairs, ice cream and sand shovels.  On occasions like this, the crowds are punctuated by Punch ‘n Judy puppet shows, Mini-golf and donkey rides, perhaps only seen in combination along the Jersey shores in the US.  But it really is summer.

I prefer the sailboats and cafe’s lining the inner harbour, sprinkled with food stalls and punctuated by fishing families.  This summer, I tell myself,  more time for the wind and the water. 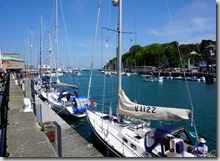 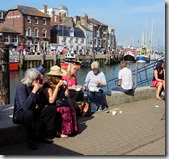 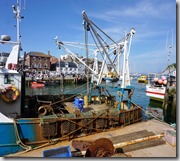 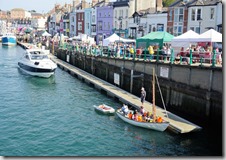 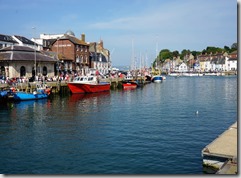 Then on to the Festival, properly, all swaying people, music and drink.  We snagged a table and angled to get a picture from social media onto the big screen. 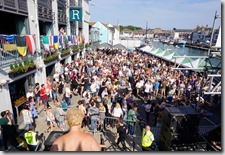 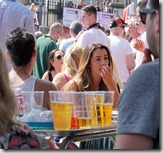 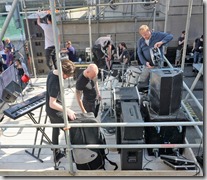 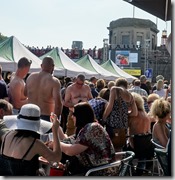 The Fayre across the river was new this year, and the better venue.  It was impossible to find room to sit, but the restaurants were doing brisk business on nibbles and beer and the music flowed over a thousand small-group conversations. 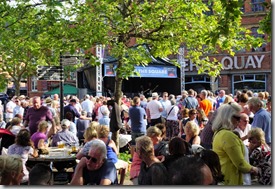 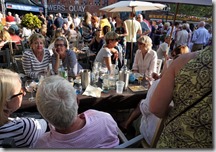 By seven pm, it’s wound down and over.  Its amazing how fast the vendors close up, the crowds disperse, and the beaches clear.  The herd, it seems, moves on quickly in search of the next oasis.

‘A still evening along Maastricht’s waterway.

In America, a Pot Pie is home-cooked fast-food.  They cost less than a dollar from Safeway, rendered into reliably binary choices of Chicken or Beef, sold under comfortable Stouffer and Callender brands, we always had several in the freezer.  When evenings were short and busy, they were a simple dinner solution.  Just toss one onto a tray, bake at 400F for 45 minutes, and up-end onto a plate for the kids to attack.

Our British brothers have a long prior tradition of savoury pies,  staple on home and pub tables.  ‘Steak and Guinness’ is the classic variety, with a lighter, layered crust and slow-cooked meat and cheese.  At home, Fish Pie  and Shepherd’s Pie, with potatoes often standing in for pastry crust, is common.  Simpler in concept,  but I admit that I have never been able to master preparing either one.

I do somewhat better with Cornish Pasty: Cut a round of biscuit dough, add a spoonful of seasoned meat & veg filling , fold and bake.

Then there are the  French cousins.

Tourtière come to mind, although these are technically not French at all, rather game pies originating in Quebec.  Quiche, better known, is more of an egg-based tart.

En croûte, ‘in a pastry crust’, is the more

Continental form of savoury pies.  Generally a shortcrust pastry wrapped around a filling, the most familiar variety is Boeuf en croûte, nephew to the grander Beef Wellington.

But other fillings can be used, and I took an interest in Salmon en croûte as a  way to dress up some fresh seafood fillets.

I have gotten good at hand-mixing shortcrust pastry, sifting the butter and flour through my fingers to a cornmeal consistency, adding a touch of water to form a fragile dough, finally refrigerating without overworking.

Once rolled out to a £1 coin thickness, build the filling in the center.

It’s simply the two seasoned filets laid over one another, with a layer of spinach, nuts, and herbs sandwiched between.

The whole affair gets wrapped, turned, and sealed: plan for getting single-layer seams rather than overlapping doubles so that the crust isn’t thick and undercooked along the edges.

Brush with egg and bake at 400F for a half hour. The result, once its rested, is really nice: a light crust,, moist salmon, and a very attractive presentation.

It kept well for a couple of days in the ‘fridge and reheats in a slow oven (microwaving makes the crust soggy).