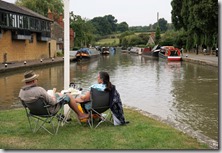 A thousand years ago, the Domesday Book took note of the outlying hamlet of Stoche, lying in the rolling hills and waterways of today’s Northamptonshire.  By 1254, its name had augmented to Stokbruer after a prominent local family, and six hundred years later the village became a transport stop along the Grand Union Canal linking London and Birmingham.  The Waterways Trust established a canal museum, one of three, in the centre of the village, along the canal between the locks and the Blisworth Tunnel.  The tunnel is over 3000 yards long and is the third longest navigable canal tunnel along the UK waterways network.

All of this makes today’s quaint and

tidy village of Stoke Bruerne a magnet for summer tourists who want to linger in the pubs, browse the history, and sail long boats through the artifacts.

Myself?  Well, I was simply lost.

I got a late start home after a long day at Colworth, and the commuter traffic was piling up along my usual route.  Maps suggested an overland alternative through Milton Keynes.  But backups at key turns forced me to amble through the back roads, eventually crossing a single-lane stone-arch bridge that edged Stoke Bruerne. I got a glimpse of shops, boats, and an idyllic shimmer of water.

The traffic could wait.  I pulled in at the Boat Inn for a pint and a walk.

Its actually a lovely little spot.  The Inn sits alongside the locks, across from the Canal Museum.  One lick lies dry, a rusted keel filling the center.  The other was busy with a family from South Carolina, leaning how to operate the valves and gates to move their boat upstream.  A small group of locals gathered to give advice. 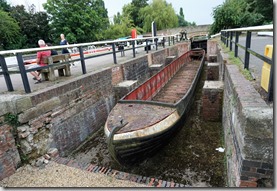 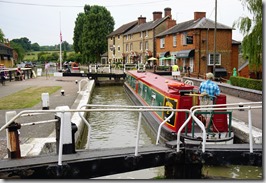 A long line of coloured long boats had moored along both margins of the canal, half a mile of the tunnel mouth.  Most seemed to have settled in for the night, occupied with drinks on the fantail, strolling the towpath, or playing guitar and singing.

I explored a quarter-mile either direction, a collection of cottages, pubs, and small shops giving way to woodland and fields. 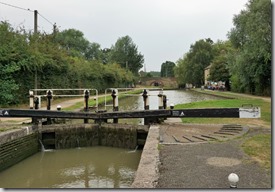 And more boats.  This must be a favoured stopover, or maybe a choke point at the lock and tunnel.  But it reminded me of the evenings  boating through the waterways of the Fens or the Broads, when everyone pulls in and starts cooking, then leans over to share drinks and to swap stories.

‘kind of a nice cruising lifestyle or a long late-summer weekend, watching the skies change colour and listening to the quiet settle into the evening.

email
« On camera
Once along Little Venice »
Radar Weather