This turns out to have been my week for walking the Canals.

I normally zip through Paddington Station on the way elsewhere, diving into the Tube or jumping onto the Great Western Railway out of the city.  Today, though, I found a couple of hours hanging about before linking up with my w.wezen and heading to Carnival.  Google Maps suggested several nearby galleries (all closed) and a couple of pubs (not for breakfast).  A coffee and a sit in the sun with a book sounded like better use of a Sunday morning, so I slipped out the back on Paddington onto the Grand Union Canal.

They are owned by the Canal and River Trust, restored by the Waterway Recovery Group, and advocated by the Inland Waterway Association.  Many date back to the Industrial Revolution in the 18th century, when wealthy landowners  and merchants would dig canals to move agricultural and mineral products to shipping and trading centers.  At it’s peak, the network embraced nearly 5000 miles of waterways, supported by associated locks, towpaths, aqueducts, and tunnels.

The Grand Union Canal and the Regent’s Canal meet behind Paddington Station, a concrete-lined trench winding beneath viaducts and footbridges.

Markedly better than I’ve described, the area was named Little Venice by poet Robert Browning, and is one of the more gentrified sections of London.  On a sunny morning, with only scattered bicyclists and joggers, canal boats at placid dock, and strolling couples taking photos of one another, it’s surprisingly peaceful and colourful. 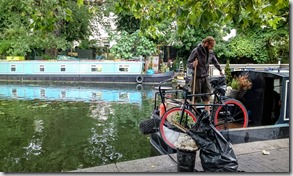 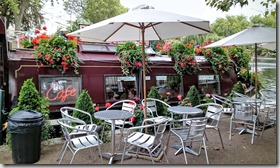 One boat owner hosed off his rear deck, another set out tables and raised umbrellas for hoped-for patrons, a third shared breads and coffee with friends laughing quietly.  I never did stop myself, there always seemed to b e better pictures a bit further along, following thoughts from the week upstream.