Work and travel kept me away from the opening weeks of the Tate Modern’s new extension, the Switch House.  Ten stories set atop The Tanks, the angular brick structure is dedicated to interactive art and video.  It opened to generally positive reviews , and invited members in for a preview ahead of the opening week last June.  This was my first chance to give it aa wander though, entering from the Turbine Hall and then up to Viewing Deck and back down level by level. 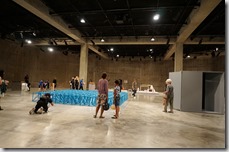 I can’t say I’m a fan of the new building.  The lowest levels are close concrete caves: dusky lighting, low ceilings, and industrial ambiance.  The exhibitions, corporate sponsorships, feel more like rough ideas than insightful art.  Posted signs warn that the staff will periodically enter to rearrange the blue scaffolds on the floor, emphasizing the rigid transience of the work.  Alcoves conceal flickering video screens, the sparse art overpowered by the heavy architectural elements.

The elevators were inadequate for the flow of visitors, often arriving full or passing completely.  Eventually we got up to the tenth-floor viewing deck, which is spectacular.  The wrap-around balcony gives wonderful views of the city, the river, and the adjacent £15 million+ apartments at Neo Bankside.  (Predictably, the gallery’s heeled neighbors are not too happy)

The floors beneath feel limited and claustrophobic: the slit wrap-around windows pull the spaces in rather than open them up in the Café and the Member’s Lounge.  There’s little space given over to showcasing art and, while I’m sure that the building will grow into it’s purpose, it doesn’t yet feel like an expansion for the museum’s collection.  It is more a working extension of its premises.

Less time spent in the Switch House translated to more time spent among the sculptures of Mona Hatoum.  A Lebanese . Palestinian artist, she works with installations of everyday objects that play with light, sound, and space.  The Tate’s overview closes in a few days, but I was particularly charmed by her illuminated and motorized works.

A sand table that creates and erases grooves beneath a rotating arm (+ and –) was nicely executed, as were two works with intricate metal and tonal meshes around flickering lights (Light Sentence and Grater Divide).  Finally, the full-room high-voltage humming of Homebound was fun, both playful and lethal  in depicting domestic confinement and small-scale threat.