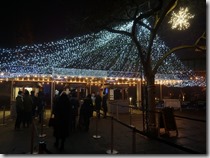 Each year, Kew Gardens hosts a nighttime Christmas event in the arboretum, a walk filled with lights and music.  My w.wezen and I went a few years ago and found it enchanting.  Word of mouth for this year was good, so we got tickets and headed out into the year-end cold for a look.

Entry is via on-line ticket application: book for a specific time and get a couple of hours to wander a loop through the park.  There’s a small village with food and shops midway through, bathrooms and a kids play area.  Otherwise, it’s a leisurely stroll through a half-dozen set pieces, lots of lit trees, and several good performances. 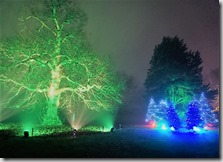 The stand-out arrangement this year was the five gold rings of  Christmas, cast in flaming yellows circles, each surrounding iconic sculptures from the song. 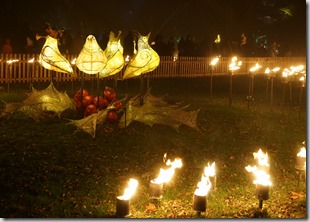 I had a bit of fondness for the bauble-laden tree, marshmallows, and stage plays. 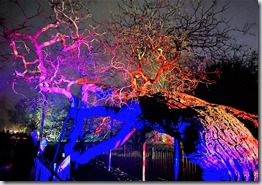 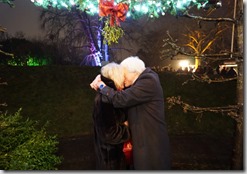 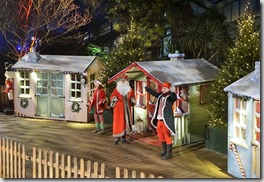 And the display of candles, and the light show over the lake, were both great.

No worries, I didn’t purchase the pudding head. 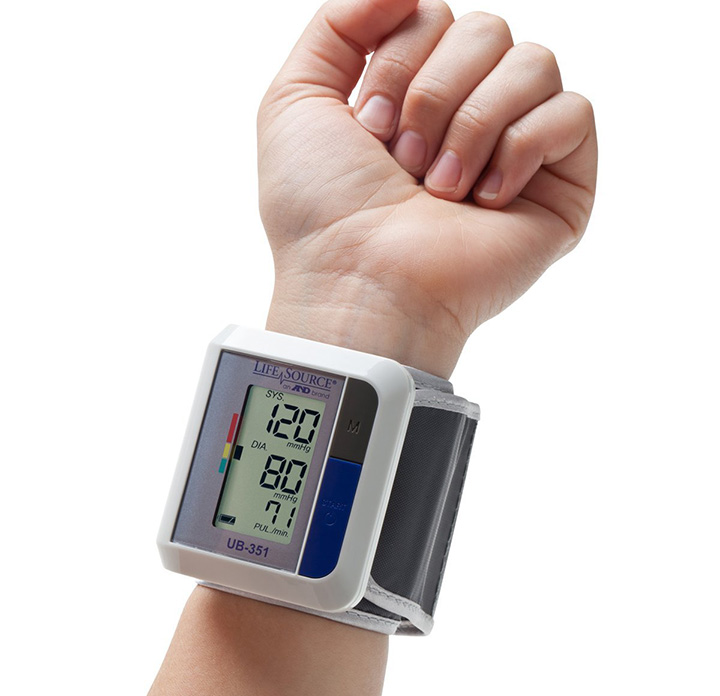 I’m never too certain of dentists outside the United States, so always save my dental checkups for visits back across the pond.  It leaves me with longer between appointments than I would like, and no backups if there is a tooth emergency, but my comforts is much higher.

This visit, the hygienist started with a blood pressure check.  She used an Omron wrist monitor, an inexpensive unit that we had evaluated and discarded as insufficiently reliable for clinical use back when I was a research director for Physio-Control.  True to expectation, the monitor gave me a 145/110 reading.

The hygienist looked concerned and repeated the measure; I was underwhelmed.  ‘Its something to get checked,’ she insisted.

I explained why I discounted the result, why I disliked the Omron, and that my blood pressure was normally a healthy 110/70.

So, I went to the Safeway and checked against the cuff testing station at the pharmacy.  140/105.  Twice.

I am not a particularly high-risk candidate for hypertension: I don’t use salt, watch my weight, exercise, no smoking, lots of vegetables.  The only risk factors are really age, stress, coffee, and alcohol.  It was hard to imagine that my stress level had gone up by that amount in a year, but the data was, unfortunately, consistent.

Nonetheless, I made the appointment at Virginia Mason and then got a bit melancholy about the indignities of expat entrepreneurship.

The doctor listened to my story, then ran a right and left arm clinical measurement with a cuff and stethoscope.  She listened to my heart and my carotids. She thumped my chest a couple of times.  Then, sShe made notes and smiled: ‘You’re healthier than I am, honestly.’

Blood pressure was around 110/70, each arm (the lower number is the important one, and should be less than 100 mm Hg, always).  No murmurs in the heart, no sounds in the carotids.  No cause for concern, keep doing what you are doing, and try to cut down on stress.

I wrote a note to the dentist, saying that he might consider taking the wrist monitor out of service.  Its not a training issue, it’s a device issue.  A nice note returned, saying that he was withdrawing it anyway for the same concerns.

‘just the diversion I needed a few days before Christmas. 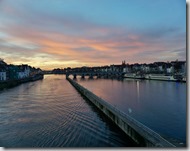 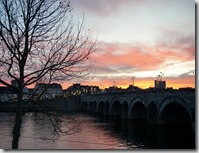 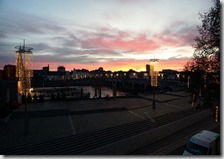 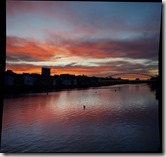 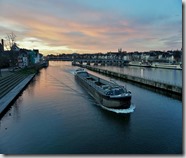 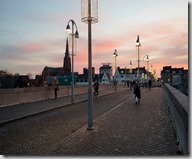 It was a trip I’ve made a hundred times.  West of London to the ferries, the Dover crossing, the long straight motorway past Bruges, Ghent, around Brussels.  The the washboard highway to Luik, a turn north at the Maas Crossing, and into the ‘skade to carry suitcases into the apartment around 7 pm.

This started no differently: packed and out mid-morning, a break for business calls and lunch at the Channel Gateway, and a smooth crossing to Calais on a nearly-empty ferry.

Traffic moved easily on the European side, until we passed Ghent.  The van ahead slowed abruptly, then stopped.  My space closed quickly, but I stopped close behind him, as did the BMW behind me.

Not so, the coupe behind her.

There was a bump, bump, then a lurch, and a crunch.  Damn.  Seven cars opened doors along the left lane as everyone got out to see what the damage was. 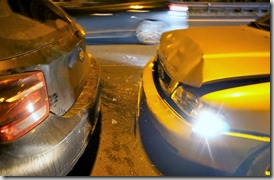 The worst was two behind, the hood tented and the engine leaking.  An SUV, trying to swerve, had crunched into the back tail of the driver at fault.  Once we’d determined that nobody was injured, everyone rested against the median barriers, shaking their head, to wait for the police.

The ambulance was first, the medics going car to car asking if anyone was hurt and reminding us that symptoms may be delayed.

The Belgian police arrived next, collecting papers and statements.  Passport, residency, driver’s license, registration, insurance,. I fortunately had them all (out of date insurance, but the lease car was current even if the paperwork lagged).

A tall administrator in a green vest moved through the group.  This will take a while, he advised.  The lead driver was Polish, he gestured behind, Two Russians there, you are English…  He shook his head.  This will take time.

The firemen arrived third: full yellow fire jackets, heavy helmets and boots.  They set up cones, began directing the blocked traffic with flashlights, started sprinkling sand around the cars and whisking it in with brooms.  There must have been twenty of them, delighted to be of service.   There was quite a pageant in operation now, interviews underway, everyone checked for alcohol.

I admitted to one beer on the ferry a couple of hours before. You have the right to wait 15 minutes before you take the test, the policeman advised.  It seemed meaningless; I took the 15-second blow and passed, as did everyone involved.

The flat-bed tow vehicle arrived last, winched up the crumpled Russian car, the two kids watching mournfully, and then the SUV.  We were asked to follow on to the next rest area, a mile ahead.  The back of my car was fine, but the front had a dimple where the hitch on the van ahead had planted into my grille and bumper.  ‘still drivable, so we convoyed ahead.

I needed to write out a statement, and re-collect all of my documents.  The police seemed eager to wrap this one up: only the woman from the BMW and the two Russians were left, answering questions in the back of a squad car.  You can go, I will email you the report, nodded the policeman, and we scooted off.

I thought that the responses were handled professionally and with a minimum or time and disruption: the whole process complete in less than two hours.  My insurance company has pans to fix the car in January,  Thankfully, nobody was hurt, we were only an hour late arriving in Maastricht.  I got a good story and the car has a temporary dent.

I’ve read that economies are boosted by disaster.  The emergency services train for these events, and deploy their resources in a good cause.  The towing and repair services find work, the police investigate and insurers negotiate.  Everyone produces activity reports that contribute to effectiveness statistics.

Still, I wonder what became of the stranded Russians.