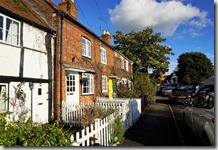 Sunny but wintry cold this weekend; the storms have passed through leaving blue-washed skies and marshy puddles across the grasslands.  Ideally, it would be a day for touring a stately house or photographing a sheltered garden, all antiques and snowdrops, but the National Trust properties don’t really open before March.

So, the open public spaces around the historic village of Cookham, far northwest Berkshire, are the only seasonal offering nearby.  Their walking trails comprise the Commons, the Moor, and the Marsh: along with associated Green and Thicket. 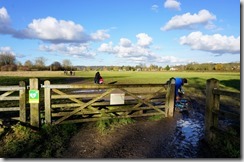 The complex is accessed from a car park at the trail head outside of town.  Hedge-planting with traditional tools was on-schedule for today, but turned out to be sold-out.

So, on to Cookham without the boots and workgloves.  The village itself, with around 6000 inhabitants, is deemed Britain’s second-richest; it was home to the painter Stanley Spencer and inspiration for the Wild Wood of Grahaem’s Wind in the Willows.  Cookham clusters along a quaint high street lined with gastropubs, tea rooms, cottages, and bridal shops. 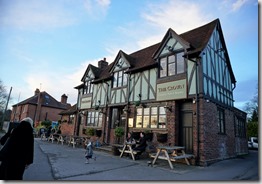 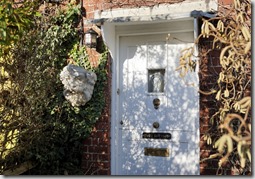 Nearby, an 11th Century Romanesque church straddles the way to the Thames River Walk; a high-ceremony-funeral was just letting out as we passed among the headstones in the churchyard.

Late afternoon light was really lovely, sky reflecting deep blue from the water and highlighting the (£4 million) homes along the water’s edge.  Lots of locals with their Wellies and terriers, anoraks and shoulderbags, were out sloshing through the fields.  Small children pushed their tiny bikes through muddy puddles; handymen tuned their chuffing canalboat engines at moorage.

It all made for a nice afternoon outing:

the walk along the Thames, tea and cake in town, a visit to the Spencer Gallery.  Increasingly, these days out together, apart from the week, seem like the best balance from the travel to meetings, design and documentation, that fill the rest of my days.

email
« Back in business
Sorting through Stanley Spencer »
Radar Weather