The NS to Amsterdam was filled with young  and old people, couples and friends, stacked high at 7 am on a misty weekend morning.  Muziekfeest of voetbal? I asked the girl across from me.  “De laatste dag van de maand,” she told me, the last day to use summer discount coupons, and everyone was headed to north for a day out.  She showed me her design website and talked me through her landscape photographs.

We didn’t hit track works until den Bosch, where we all exited for the snelbus to Utrecht, spiraling up the stairs with luggage or children in hand.  I was running early, so the delay provided more chance to see the countryside and chat with the seatmates.

I caught up with reading the weekend papers, the FT questioned the purpose of design museums (but I still like them) and devoted it’s magazine to Parisian foods.  The Shrink and Sage asked whether we should stop moaning  (Okay if it is intermittent, well-founded, and mutually shared with a friend). The NYTimes had the more intriguing question though: Schools should be safe, but learning should be dangerous: Should teachers and curriculums include provocative topics and ideas that students must react to?

It seems like it’s good to be challenged and broadened in a safe space: a bit like having your mind indirectly vaccinated through encounters with subversive literature and experimental theater.  And, if not in the schools, where should children learn how to interpret and respond to the many philosophies and practices that they will encounter later in life?  Home, church, on the street, when-it-happens?

I thought about applying the idea to something more practical: understanding people in other countries.

In the 60’s, we studied cultures in the 60’s: culture and tradition in social studies and language classes.  People from Peru wore embroidered red dresses and wide-brimmed hats; people from Paris ate snails (we made a batch) and rode bicycles (It’s a bit like Life in the UK testing.)  In later decades this gave over to promoting diversity and multiculturalism: study of emerging political and social voices through literature and current events, building awareness of minorities and post-colonial guilt.

But none of it really prepares you for actual encounters with people from another culture. I was fortunate to have been on the Experiment in International Living: a summer in Switzerland at 17, living on a farm. You come to understand how everyday things get done and how people think differently about social and political institutions. Its been true throughout my life since.  The Dutch experiences in World War II are not written in our history books: I needed to talk with people about their grandfather’s stories of hardship and hiding during the Occupation to really understand.

But we can’t send students across the world to experience other cultures.  How can we give them provocative experiences of another culture to react to and learn from?  Back in the day, some people had Pen Pals, overseas friends that they would exchange letters with.  Technology could

potentially update the idea: we can give students a telepresence with immersive visual and audio links through Glass and other lifelogging tools.  What if a live hour of touring home or community, going shopping, or hanging out with friends could be made available, shared, discussed and compared?

The key to understanding lies in the experience of ordinary life for an individual person today; we can use our tools to do this better than when I was growing up.

The plane was winging into Southampton by noon, I’d planned for a walk along the Thames if the day turned sunny.  It was, and I did: relaxed conversations beneath the willows, a pint of ale, watching autumn arriving. 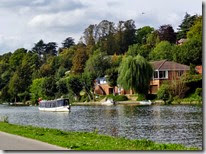 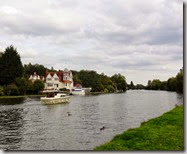 At high school graduation, the principal proudly read the statistics about where the graduates were headed after the summer. A third were going on to four year colleges and universities. 14% will attend to two-year colleges; 7% are going to vocational or trade schools. And the remainder, 36%, had chosen “Ministries and missions, military, travel, time-off, or undecided”.

It’s been a buzz among parents for the last few days: 36% seems remarkably high. I don’t know what the trend is, or how it compares to other regions of the US or Western Europe, but I would have expected the number to be less than half of that.

Economics could play a role: college is unbelievably expensive. Four-year expenses at a private university cost a family a quarter-million dollars; state schools run about half that amount. But Woodinville is fairly well-off, and most families use savings or home equity, supplemented by student loans and small scholarships. Someone suggested that, with Microsoft nearby, maybe we were too well-off: the trust fund children didn’t need schools or jobs. ‘maybe in isolated cases, but not 160 children.

Dori, the commencement speaker, made the observation that a 3.6 grade point average (out of 4.0) is only good enough to get onto the waiting list at the University of Washington, a state school. The level of competition for limited openings is intense, and many kids may just drop out of the race along the way. But then I would have expected the numbers for two-year and vocational schools to be higher.

I think that the answer lies with a qualitative shift in how kids view the value of college. I’ve heard two arguments against it.

Skills learned in school are not relevant to later careers. Core classes, taken during the first two years, broadly encompass general education requirements. Students struggle with topics that don’t interest them, that they aren’t good at, or that teach skills that they will never use. It has a double effect, since poor performance may deny them entry to upper-level specialized programs.

The college degree no longer has value. Look at all of the graduates who are taking entry-level jobs that they could have gotten without the four-year investment. Surely it would make more sense to enter the market immediately and to have the experience instead. And the schools themselves have been rebranding as lifestyle choices, softening the academic message in favor of their social communities and scenic locations.

I suspect that parents with marginal economic means or free-market social outlooks will not push back when their child says that they aren’t interested or don’t feel ready for college.

Whatever the reason, I am concerned about the statistic.

Education is still the only path to acquire the skills needed for today’s careers. Few careers have entry paths through training and apprenticeship: kids cannot work their way up from unskilled positions into marketing, engineering, or finance roles. Universities further provide a diverse academic environment where interests can be explored and future paths chosen.

I’ve watched my kids, and others, struggle to get an economic foothold via a string of entry-level jobs, further trying to make time to grow a social life while living at home and working 50 hours a week.

Paths around continued education are much more difficult to manage, and success is much less assured. I do think that we need to understand why a the third of the graduating class makes the choice to turn away from continued education, and either support an alternative or change the perceptions that motivate it.