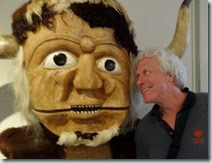 Britain was settled about 6000 years ago; the discovery of bronze (copper and tin) coincided with a growth in the native Celtic population and consolidation into villages.  Before the arrival of the Romans, society appears to have become less stable, less agrarian, and villages retreated into hill-forts, 30 of them in Dorset alone.  The best known is Maiden Castle, outside Dorchester about 35 miles from where I live.

And the beast, above, is an Ooser, a local demon which inspires terror in the minds of the foolish

and the wicked.  I should be so lucky.

‘better to putter about the Thomas Hardy memorabilia and manuscripts, where lie gems like Happiness is but a mere episode in the general drama of pain.

Now I miss the Ooser…

Saturday arrived unexpectedly sunny and cloudless, despite predictions of rain, so ‘headed up after cooked breakfast.  The location is not well (actually, not at all) signposted, so the route has to start in town.

And, once there and appropriately coffee’d and sun’d, there’s no place better than the Dorset County Museum. 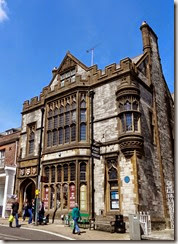 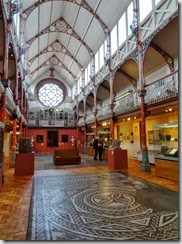 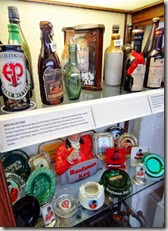 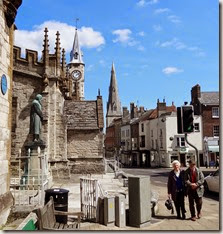 Its an attic of a place, lots of archeological and natural history exhibits covering the Jurassic through Roman eras of Dorset.  Everything is well-marked, with a quirky local twist.  The exhibit on Leisure Through the Ages is vaguely disapproving of the whole concept; sections on local brewers and quarrymen lament the loss of jobs and lifestyle while documenting the everyday lives of the citizens. 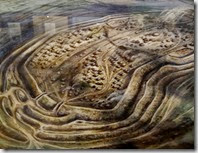 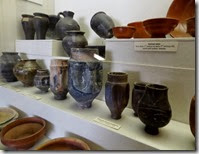 The depictions of Maiden Castle, and of the Bronze and Iron Age artifacts found there, are excellent

(despite grumbles about farmers plowing fields before scientists can reach them).  I can now distinguish varieties of Barrows (right: large domed mounds) by age and gender, and the stone chips characteristic of Dorset tribes.

Then (after a coffee and review), it was off to find the castle, actually a huge mound of earthworks southwest of town (with barrows).  It’s an impressive mound, surrounded by huge serrated bulwarks and weaving access corridors, all grassed over to prevent erosion.  The grass, in turn, is kept under control by hundreds of pale ragged sheep scattered across the flat expanse of the hilltop.  Hundreds of people once lived here before being turned out by the Romans in the first century and moved to the river at Dorchester (its hard to understand how they did get water: the books suggest”dew collection pits”). 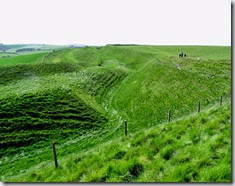 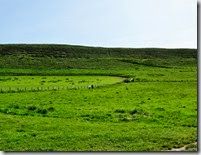 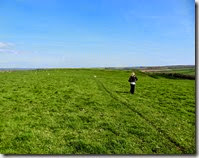 There is a trail around the rim that gives good views and access to a few historical markers.  It’s an impressive site, though: its easy to appreciate what daily life must have been like and how the first glimpse of the Romans coming up from the south might have looked. 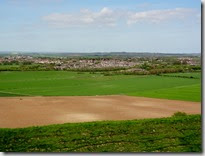 admire the view (Dorchester, right), it takes about an hour and a half to cover it well (and to nod to the other walkers going clockwise and encountering one another time after time).

There is so little known about the period that its easy to get my head around it in an afternoon – I’m sure that the more recent portions of Life in the UK won’t be so easy about the various rulers after the War of the Roses.

I’m back in Maastricht after a wonderful break in Istanbul, aided by cheap fares from Frankfurt on Condor Air (SunExpress) and some favorable hotel prices in the old city of Sultanahmet.   There’s always lots of experiences and ideas to share after an expedition like this one, where the history and culture are so rich and different, and I was looking for a place to start.

A note from Nick at The Expat Files caught my attention: he’d been reading about American author Mark Twain’s visit to Istanbul and hoped that my experiences were better.

It completely diverted me last night. The book is Innocent’s Abroad: Twain’s account of his Grand Tour of Europe and the Middle East in 1867.  The book is widely available for free download and there are both contrasts and overlaps in perspectives shared across 140 years.

“Seen from the anchorage or from a mile or so up the Bosporus, it is by far the handsomest city we have seen. Its dense array of houses swells upward from the water’s edge, and spreads over the domes of many hills; and the gardens that peep out here and there, the great globes of the mosques, and the countless minarets that meet the eye every where, invest the metropolis with the quaint Oriental aspect one dreams of when he reads books of eastern travel. Constantinople makes a noble picture.”

The first impression is of endless high-rise apartment blocks, filling the dry landscape as the plane arcs in towards the Sabiha Gokcen airport on the Asia side.  I remember how small-scale developments of only a few buildings ended badly in Chicago’s south side; here they crowd in the hundreds, apparently successfully. 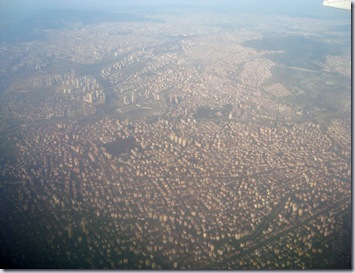 But the old city, a World Heritage Site, retains much the same  surface character from the water as it must have presented in Twain’s time. 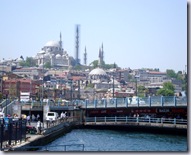 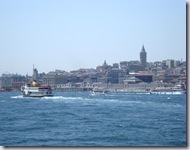 “Ashore, it was–well, it was an eternal circus. People were thicker than bees, in those narrow streets…The shops here are mere coops, mere boxes, bath-rooms, closets–any thing you please to call them–on the first floor…Crowding the narrow streets in front of them are beggars, who beg forever, yet never collect any thing…A street in Constantinople is a picture which one ought to see once–not oftener.”

Sultanahmet is is, indeed, a jumble of narrow streets lined with piled-upon buildings: stores capped by apartments crowned by terraces and sheet-metal bedrooms.  But each avenue is meticulously maintained and full of life, full of friends greeting one another, goods being bought,  moved, sold, watched from every doorway by alert shopkeepers eyeing every potential customer. 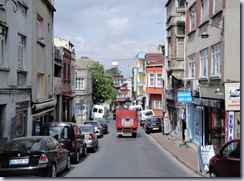 The Grand Bazaar is a monstrous hive of little shops–thousands, I should say–all under one roof, and cut up into innumerable little blocks by narrow streets which are arched overhead…The place is crowded with people all the time…full of life, and stir, and business, dirt, beggars, asses, yelling peddlers, porters, dervishes, high-born Turkish female shoppers, Greeks, and weird-looking and weirdly dressed Mohammedans from the mountains and the far provinces–and the only solitary thing one does not smell when he is in the Great Bazaar, is something which smells good.

No evil smells, but the Bazaar is, indeed filled with shops selling brightly-colored/everything-imaginable, shouting outlandish claims of value and murmered in closely negotiated cash prices. 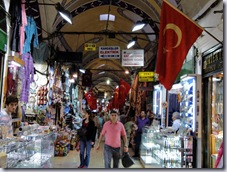 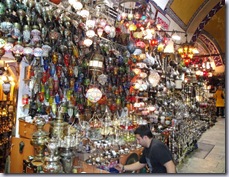 I do not think much of the Mosque of St Sophia…thirteen or fourteen hundred years old, and unsightly enough to be very, very much older. Its immense dome is said to be more wonderful than St Peter’s, but its dirt is much more wonderful than its dome, though they never mention it…The inside of the dome is figured all over with a monstrous inscription in Turkish characters, wrought in gold mosaic, that looks as glaring as a circus bill; the pavements and the marble balustrades are all battered and dirty; the perspective is marred every where by a web of ropes that depend from the dizzy height of the dome, and suspend countless dingy, coarse oil lamps…The people who go into ecstasies over St Sophia must surely get them out of the guide-book.”

Unfortunately, Hagia Sophia seems much as described: dark and peeling, massive and abandoned.  Smithsonian Magazine recently published an insightful article about the political and technical struggles to save the structure; the central space is filled with restoration scaffolding.

Golden mosaics are crumbled, faded, probably eroded by both man and nature. Islamic and Christian artifacts compete for space: the mihrab crowds the alter, yet interestingly angled purposefully just a few degrees off of the main axis of the building.

Everywhere are similar questions and inconsistencies.  The building is an artifact that feels washed up from millennial time and epochal struggles, worn and brooding like the Swedish Vasa. 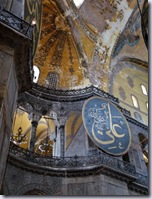 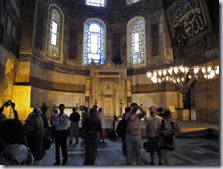 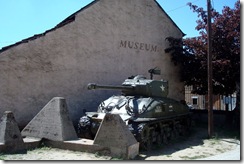 My Frommer’s Guide recommended a stop at the National Museum of Military History in Diekirch, Luxembourg, dedicated to the Battle of the Bulge in the Second World War. It’s hard to imagine, today, that the rolling countryside had seen such fierce fighting: the villages are timeless and unspoiled, set into deep green forests and sunny fields of bright yellow rapeseed.  The museum is tucked along the main city street, guarded by an Allied tank peeking from behind an alley, a bit incongruous against the bustling shops and restaurants up the street. 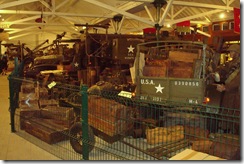 Inside, it first looks like the largest Army Surplus Store anywhere (I think that I actually recognized a flashlight and field shovel that had been handed down to our Boy Scout troop). 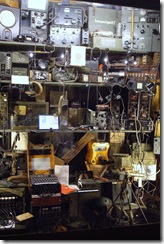 The curators have collected up anything and everything left behind from the war and filled shelves,  display cases, and whole rooms with cascades of artifacts.  It’s hard to appreciate the individual pieces, there’s just so much of it.

Deeper into the museum, the displays organize into re-creations of scenes from the time, with mannequins dressed in old uniforms and surrounded by everyday things. 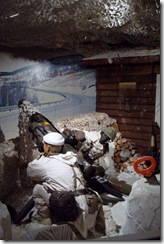 One scene of three men in a foxhole was accompanied by a picture and a letter: the life-sized model recreated the photograph, and one of the veterans who was in the picture had written in the 80s to describe the experience.  It was a moving letter, and helped me to really connect to what this was all about, and to give me a way of seeing into the scenes and the times.

There are dozens of everyday scenes, 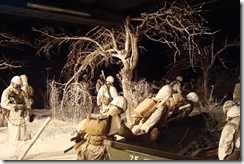 soldiers struggling to move supplies through deep snow, a communications team huddled in a ruined basement, a mortar squad hiding in a farmhouse kitchen, troops lined up for a 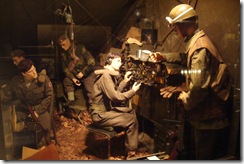 rare hot meal, others searching for supplies in a town.  The conditions were extreme that winter, and the abundant letters and photographs that line the walls describe the hardships of the battle and inadequacies of the food and clothing.

It seem incredible that, within decades, Europeans were able to set the experience aside and come together as allies.

In Arnhem, in Diekirch, in Normandy, and elsewhere, I’ve visited battlefields and museums that vividly describe the fierce battles, sacrifices, and privation of that time.  Smaller countries like the Netherlands and Luxembourg were occupied early in the war, and liberated later, so they don’t enter into our history texts as clearly.  But a visit to these areas reveals the forced conscription, the raids on houses already short of food, the separation of families, and the harsh conditions that people endured for years.  The experiences must have changed people, angered them, hardened them.  Yet politically, and to a lesser extent socially, Europe seems to have been able to move past it.

I talked with some friends about why: maybe it’s because the Allies ultimately won the war, or because the generation that fought it has passed.  Perhaps, as buildings are reconstructed and forests grow back, life returns.  But active memories of conflicts last generations in other parts of the world, with endless wars of redress and revenge.

I haven’t found a satisfactory answer to how Europeans moved their lives past the scenes depicted in the museum.  The vibrant city life outside shows that, however they did it, they made the right choices to leave a better world to their children.  But I can’t imagine how.