Tracy Ulman has been having a gentle go at Judi Dench this season.  In each skit, Dame Dench raises antisocial havoc, then escapes by claiming that she is a National Treasure, obviously beyond reproach.

An actual national treasure, Simon Weston, was featured in an informal conversation in the Corn Exchange that we attended this evening.  It’s an inspirational story, a sailor on duty in the Falkland War whose ship was bombed while in harbour. 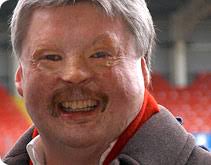 The ammunition exploded, killed many and leaving Mr. Weston horribly burned.  He struggled for years with 70 major operations, skin grafts and rehabilitation.  On recovery, he devoted himself to charitable causes and to being a living example of resilience in the face of overwhelming physical and mental hardship.

The evening was part of a tour titled My Life, My St0ry.  Guided by a long-standing friend and radio presenter, Mr Weston shares his biography, his memories of the attack (backed by news footage of the explosion), and his struggles with the long climb back to independent living and to finding a cause for his life.  His account is horrific and came to completely define him.

He keeps good humour throughout, sharing anecdotes and self-depreciating quips even through the worst painful doubting moments of his recovery.

In the end, though, the story tailed off to the reason for the tour, and felt that an inspiring lesson was missing.  I think that an American hero would have felt compelled to include an explicit moral message to emphasize the lesson learned.  None was offered here.

Long ago, when my company was struggling through a shutdown with no revenue, the president called us all into the management room for a lecture from Al Haynes.

In 1989, Captain Haynes was pilot of United Flight 232, which suffered a catastrophic failure in a tail-mounted engine and loss of all flight controls.  Captain Haynes attempted an emergency landing in Sioux City which almost succeeded, but a drooping wingtip caused the plane to cartwheel down the runway, bursting into flames.  111 people perished, while 185 survived, a remarkable achievement credited entirely to the crew.

Al Haynes described the incident, his thoughts and actions, and his feelings  looking back on the incident.

His total concern for his passengers and his lingering sadness at the lives lost was inspiring.  he concluded with a moral about the importance of  preparedness; not in calculating the risk that something might go wrong, but in knowing beforehand what to do when it did.

The debate among the managers afterwards was what message we were being asked to take from the lecture.  It was too late to be prepared for what had already happened to the company.  Should we see how to look back on events and learn, or ahead to being better prepared the next time?  Was our present predicament being foreshadowed as a catastrophic crash for the company?

Simon’s says that his message is one of single-minded determination, to not only accept what is, but to turn that to your advantage. Simon’s own career clearly demonstrates how a positive mental attitude can achieve great business goals.  I didn’t hear that in the talk.

Most people commented that their take-away was inspiration to keep their own strength and resilience in the face of hardships much less than what he endured.

Maybe everyone finds their own meaning in stories like these, and an explicit moral only interrupts that process.  Maybe the connection is emotional rather than intellectual.  Maybe we have an evening of compassion for another person’s suffering and courage.

It’s difficult listening, National Treasures so unlike the comedic satire.  But worthwhile listening, in measured doses (I’m a soft touch for having sympathetic pains).

email
« Sunday on the beach
The Nettlebed Kiln »
Radar Weather