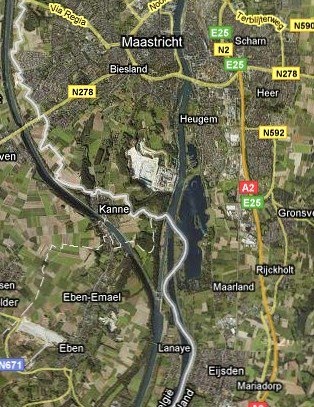 Today was a wonderfully sunny day, unusual after the cold nights and foggy mornings that we’ve been having the past week. Although there was work to be done (housework if nothing else), the rivers and fields were far more tempting, so I saddled up the Locomotief ( a vintage east-german bicycle according to my Dutch friends, with more years on its frame than it cost me in euros) and headed south.

The road out of town leads to Eijsden (right, courtesy Google Maps), one of the oldest and most southern villages in the Netherlands. Originally funded as a roman settlement, then becoming one of the dominant areas for fruit-trees, and finally a center for producing zinc and gravel, the village has now become a bedroom community for Maastricht. There are rows of neat, modern brick houses, a small village square, café’s along the river, and a chateau / castle at the perimeter. The bike path winds through orchards and fields of cows, finally ending up at the river crossing past the town center. 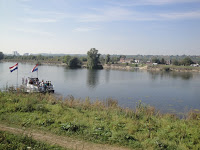 The Netherlands are thick with irrigation canals and diverted creeks; many fields and country homes are bordered by small, straight, neatly tended waterways, with small bridges and earthworks connecting homes to streets, paddock to field, and town to island. Larger rivers, such as the Waal near Tiel or the Meuse near Eijsden, are served by small private ferry boats. These are quick and efficient, chugging back and forth across the river every few minutes, carrying pedestrians and cyclists for a one-euro fare each way. 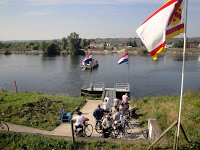 The Eijsden ferry is unique because it leaves the Netherlands on the east bank and lands in Belgium to the west (the while line snaking through the map, above). Both countries fly flags at their docks; I’m not sure how it functioned before the Schengen treaty opened the borders (everyone had to flash their passport and have their saddlebags inspected during the crossing?) In any case it makes for a nice break in the ride: everyone lines up at the shore and exchanges route suggestions and restaurant reviews while waiting for the boat. There’s a rush to get good rail position once the ferry docks, and the children poke at the passing ducks and swans as the boat chugs over.

Both banks of the river have cafes that offer bier, vlaai, and shade to watch the flow of traffic: the vast majority of people were headed from the Dutch to the Belgian side this Sunday. Cyclists were evenly divided between casual family bikers and serious teams in matching helmets and spandex. It’s going to be a while before I’m in shape for the super suit.

The route back north passes the Sluis, deep locks that lift working barges over a drop in the river. Many cyclists stop to watch the boats go up and down: I think that there’s a Dutch link and fascination with the water and the boats since the show draws in everyone, not just the children. The full circle beyond the locks leads back to the old city wall and gate of Maastricht, about three hours of very leisurely autumn riding, looking, and eating.