Following on New Year’s renewal, I’ve been working to get out more – lectures around town, a bit more exploring in London, events to warm the short winter days.  The University maintains a really good notification service for lectures around campus through Talks@Cam, worth subscribing to if you live in the area or consulting when you visit.  The Music and Events guides are much worse, nothing like the Week in/Week uit guide for Maastricht.

Wolfson College held it’s annual Burns Night Formal Hall and Ceilidh last week. And, looking at that sentence, probably everything in it needs translating.  (And, no, that is not me in the kilt, above). 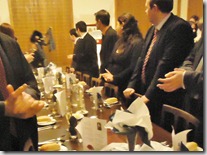 Wolfson was my home college at Cambridge; Formal Hall is a formal dinner arranged for the Fellows, Members and Guests twice a week.  Attendees dress up in their college robes (a bit like Harry Potter), sip champagne with the president, dine by candlelight in the main hall, and share spirits from the college cellar afterwards. 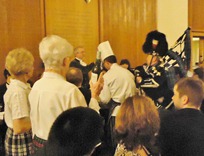 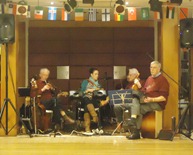 Burns Night is a traditional Scottish dinner celebrating poet Robert Burns: there are bagpipes, readings from his works, haggis, whisky, traditional toasts, lots of thick brogue and kilts.  And there is a dance afterwards, a Ceilidh, pronounced Kay’-lee and a bit like a barn dance in the US, with more drinking and revelry until the wee hours.

It’s always fun: the toasts are filled with clever Cambridge irony and commentary, the conversation with other Members of the College is always interesting, and the dancers are game but dismal, a good time all around.

And, while in London on business there was time to take in the Pitman Painters, a production at the Duchess Theater about the true story of the Ashington Group.  These are Newcastle miners who invited a university lecturer to teach them about art, then guide them through creating paintings of their own.  Their primitive realistic works became a hit in among critics and patrons, sparking debates about the nature of art, talent, class, and economics.  It’s engaging and thoughtful, sometimes getting a bit preachy but generally capturing the contradictions in these men and their work very well.

A persistent idealism runs through the play, part of 1930’s politics and economics, suggesting that the failures of capitalism could be addressed by a new classless socialism, giving the tools of production to the workers and distributing the benefits equally.

The miners see their work enriching others at their expense, not just separating them by income and opportunity, but relegating them to a diminished class of people.  Some of the best scenes are when they try to reconcile who they think they are with how others see them, proud of their value yet suspicious that they are being used by others.

Newspaper reviews of the play generally speak of the tragedy of that idealism, how it was crushed during the Thatcher years.  It’s difficult to understand what hope they thought they saw in socialism, it’s not a part of the political vocabulary today in the same way (or, in the US, at all).  But the problems that they rail against remain real and widening.  A little idealism in some alternative wouldn’t hurt.