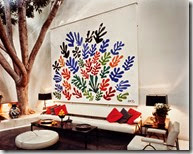 Henri Matisse has always been one of my favorite artists.  He captures, with elegant simplicity and a minimum of lines, the essence of a scene or a person, capturing personality and movement with a few well-chosen strokes.  So I’ve really been looking forward to visiting the exhibit of his cut-outs, visible at the Tate Modern through September 7.

Its been nice to be able to drop through the Tate this year, unannounced, able to simply walk into any show, any time, with the Member’s Pass.  I visit more, linger more, take a friend and discuss the works one by one.  I wish it allowed me to photograph the works so that I can study them later, but it’s a wonderful spur to see the shows. 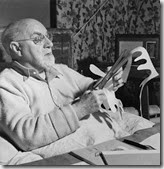 The Cut-Outs are a collection of works from late in Matisse’s life, in his 80s but still full of creativity and willing to explore new media. The still at the right is from a movie of him cutting a form, huge scissors making smooth shapes as he rotates the paper and shakes out the form to see the fronds wriggle, visualizing the art in three dimensions.  I thought that the works were finished on cutting, composed into collage, but there were actually several distinct purposes to the form.

Composition:  The early rooms show how Matisse used the paper shapes to compose pictures that the later painted.  Abstract triangles and orbs were pinned to paper and moved around until perfect the form and balance was achieved, then he would paint or print the results.  The finished works are identical to the compositions, linked by his working notes.

I was tickled by the nudes in Acrobats (Spring-Summer: 1952), in which he used cutouts to augment the breasts, making the figure more voluptuous.

You’re never too old to be a boy at heart.

Models:  In Room 7 he uses large cutouts to work out the arrangements of a chapel that he designed for the Dominican Chapel in Vence.   He created the glass window, the wall hangings, the priest’s vestments, all as an integrated life-sized whole, to be recreated as finished work in the chapel. 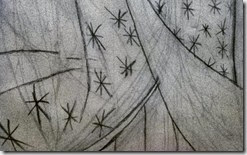 I liked the Madonna and Child, the obvious sketch lines as he fiddled with proportions, narrowing the hips, face, hair progressively until he

had the form that he wanted.

The Christmas Eve window in Room 14, cutout model alongside stained glass instantiation, is also fascinating for how he deconstructed the elementary shapes of the composition, adding lines and sections as he moved between the model and the finished media. I wouldn’t have done that, but that’s why I’m no Matisse.

Finished works:  The series of four Blue Nudes, separated in galleries around the world, have been brought together.  These are deconstructed monochromatic  figures, their parts separated but still unified by the way that he used negative spaces.  The images are replicated, refined, resized, and

multiplied throughout succeeding rooms, always full of life and movement.

Creole Dancer, right, is an explosion of colour and a blur of life, created in a single day from pieces of left-over paper based on sketches of a model he entertained.

Murals:  These were the most delightful surprise of the show. 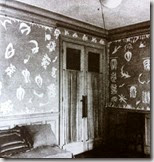 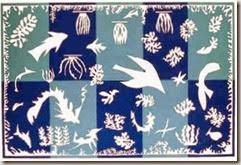 As Matisse cut out large organic shapes, he would put them on the wall, initially to cover imperfections in the plaster, but later as fully considered works.  The result, vast murals that resemble underwater scenes (Oceania, above) or jungle environments (Vence studio, below).   Originally, the cut outs were open to the air and loosely attached, so they would sway and rustle in passing air currents.

Even framed, as they are now, they are an absolute delight of form and colour,  filling the space with creativity and energy.

It’s a thoughtful and fun exhibit, a celebration well worth a couple of hours spent wandering the works back and forth to compare technique and  purpose.