I’m sure we’re missing something…  We were standing at the location of Bracknell’s Christmas Market, empty and dark.  Walkways led away in four directions, darkened red-brick High-Street shops lining the ways out  to the encircling ring road.  Cranes disappeared overhead into the

Maybe a park, or a church grounds nearby?

We retired to Blues Smokhouse to consult the Internet and local guides.

The Berkshire village of Braknell was established over a thousand years ago, regustered in a Winkfield Boundary Charter as Braccan heal, "Nook of land belonging to a man called Bracca".  It was designated a New Town after the second world war, earmarked as an overflow village, expanded to accomodate 25,000 residents relocating from the larger cities.

Because of the age of structures throughout the town, a major urban redevelopment was subsequently proposed, then finally approved in 2008 just as the financial crisis took hold.  This delayed work on the core’s renewal projects, centered around The Lexicon.  This year, the town declared that, despite the extensive onstruction, it would carry on with Christmas As Usual. 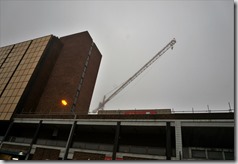 The status, then, is that Bracknell is under reconsideration.  The  entire town has been razed and, one day soon, a better village shall emerge from the mud.  Christmas lights ares pretty aspirational under the circumstances.

I always have mixed feelings about urban renewal on this scale.  A lot seems lost when the historic fronts and winding streets are leveled.  More seems lost when local businesses are replaced by national chain outlets.

And the soul seems missing when the public square is dark and empty at this time of year.