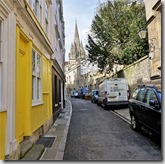 I remember, 40 years ago, a family trip to Europe that began with a drive through southwest England.  My father attempted to Y-turn the rental car in a narrow Oxford street and nicked a corner brick out of the venerable University walls.  Forty years have passed without revisiting the scene.  But, as a take-the-day-off trip to celebrate my sixty-second year, a do-over of Oxford seemed like a perfect plan.

For a Cambridge man, Oxford was always portrayed as urban, stuffy, literary and snobbish.  There was never much reason to pay it much attention except at the annual Boat Race (which Cambridge won this year) or counting up Nobel Prizes (92  vs. 51 awards to affiliates). 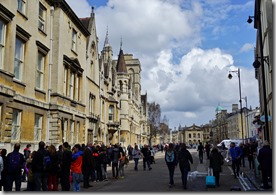 We had plans for lunch at The Boathouse on the River Cherwell, and an exhibit of fifteenth century Florentine Drawings. at Christ Church Gallery.

The Boathouse was lovely, nestled along the punting docks om the riverbanks, with a nice selection of fish and vegetarian mains.

The exhibit had the paintings arranged and annotated to tell the story of Filippino Lippi and his contemporaries well, and the staff helped in seeing some of the hidden details (the pseudo 3-D effect in Viviano Codazzi’s An Architectural Fantasy was particularly good).

Outside, we spent a couple of hours wandering around the colleges and browsing a literary fair.  Apparently, Cambridge Men cannot enter any Oxford College unless their home college is ‘Twinned’ (My Wolfson is paired with St. Antony’s, fittingly specializing in international studies).

There isn’t the parklike feel of the Cambridge Backs, nor the contemplative quiet of our Scholar’s Gardens.  But there is a scholarly weight to the place, Latin lettered over the entryways and brooding stone portraits arrayed along the fences.

I liked the views across the commons and the tree-lined alleyways: it would be nice to come back to wander the bookshops and sculpture gardens another time. 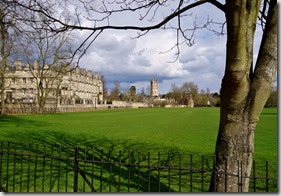 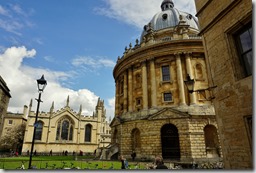 We capped the day at the French Horn restaurant in Sonning, a one-Michelin star set along the riverbanks near one of George Clooney’s homes.  The staff outnumbers diners about four-to-one, so every course has a bit of theater to it, and the owner stops by periodically to make sure that everything is being done right.

It’s a nice way to spend number 62: never what I might have expected at 22 when last in Oxford.  At least I can say that I have aged better than the Salvator Rosa’s painting of a comparably aged hermit.

Here’s my birthday photo, taken between two vintage cars minted in the same year as me at the F1 Museum, Stavelot. 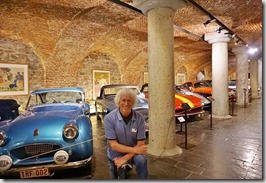 The cars to either side are an Austin-Healey 100/4 and a Triumph TR2.  And I’m particularly pleased that all three of us are appropriately wearing Cambridge light blue colours.

email
« Once around and back
East Cliff, West Bay »
Radar Weather