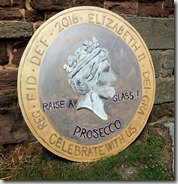 We arrived hours early for the production: it’s hard to gauge distance and traffic through SoGlo (South Gloucestershire) so best to start out early.  Our birthday destination was a restored rococo garden, the setting for a frolic through Shakespeare’s tragedy Richard III as performed by a traveling bicycle quartet.

The weekend began with morning celebrations amidst a block party celebrating the Queens’ birthday.  My contribution, a deconstructed black-forest cake, was much better in concept than execution.  The rich-chocolate and sour-cream-vanilla layer cakes were lovely, but the cherry butter icing failed to set properly, slumping off  the cake as temperature rose. 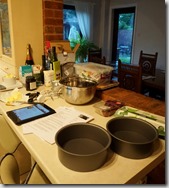 I improved on it whilst waiting for my laundry to finish, adding two packs of icing sugar at the suggestion of onlookers in the carpark.  The result was 4th-grade amateur: I shaved chocolate on top rather than making a ganache, covering flaws with cherries and ornamental flowers.

Never mind, it tasted better than it looked.

The weekend’s venue, Berwick Lodge, was far more stylish.  A converted country house with sweeping views over the Severen and a killer afternoon tea-and-cakes, it foreshadowed a nice evening of theater on the lawn.

The Painswick Rococo Gardens were created in the 1700s as an ornamental setting for casual parties and frivolous behaviour.  Restored in the 1970s, it’s a striking arrangement across a narrow valley, with a maze, vegetable gardens, and ornamental pools. 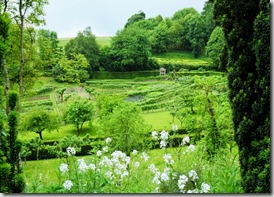 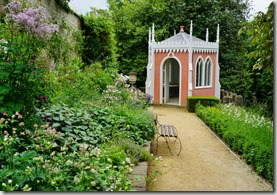 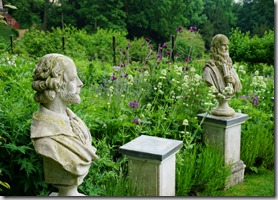 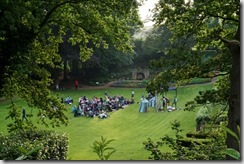 The evening of Shakespeare was held in a grassy sward, blankets sat ahead of folks with chairs.  The play was performed by the Handlebards, a wonderful troupe of four actors playing around 41 parts of the play.  They covered it all, but with a lot of light-hearted mugging and joking asides that lightened the intrigue and murder of the script.  Wonderfully engaging, it is well worth attending this summer. 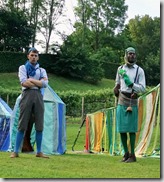